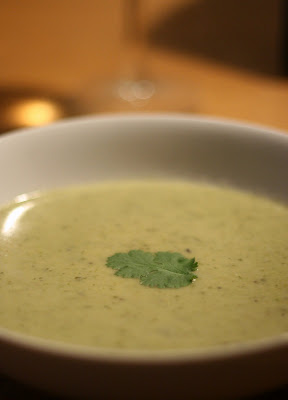 I’d be planning on making some kind of pea soup for a couple of weeks, and when I stumbled upon the recipe for Green Soup in Madhur Jaffrey’s Illustrated Indian Cookbook, it sounded well worth a try. My only complaint with Madhur Jaffrey’s book is that many of the ingredients are measured by weight, and personally, I don’t tend to weigh anything (including myself), instead, I tend to go by rough volume for the various ingredients. So in choosing the potatoes to use, rather than going by the kilo weight that was suggested in the recipe, I just chose two huge baking potatoes, that I decided would take less time peel and cube for the soup.

I also skimped slightly on the amount of salt, and added some black pepper, as there is very little that I don’t add black pepper to.

The only other deviation I made from the recipe was with the Ginger. I put the thumb-sized piece in without a hitch. However, the recipe said to remove it after the first 30 minutes of cooking, something I forgot to do, and so it got blended with the other ingredients a bit later on. To be honest, I don’t think it spoilt the flavour at all. There was definitely a noticeable Ginger flavour, but it didn’t overpower the others. I suppose it depends on how much you like Ginger, and of the people who tasted it, nobody seemed to be complain.

Put the Potatoes, Onion, Chicken Stock, Ground Coriander and Ground Cumin into a large pan, bring to the boil, then simmer for 30 minutes, so that the potatoes are cooked. Add the Chili, Fresh Coriander, Peas, Salt, Pepper and Lemon Juice, bring back to the boil, then simmer for a further 5 minutes. Once the peas are cooked, remove from the heat, then blend until smooth (personally, I used my usual hand-blender). Stir in the Double Cream while gently reheating and serve immediately.
at 17:10

Green soup sounds great and tasty as it is not so difficult to prepare at home.

You can also use nonfat yogurt in place of cream which doesn't alter the flavor and makes it a healthier alternative. :)