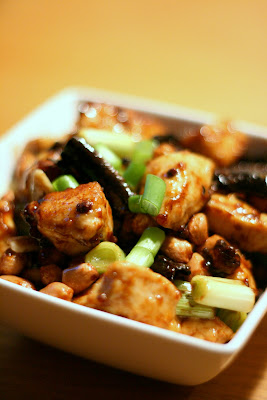 I’ve always been a fan of Chinese food, but until recently, I had never really tried very hard to make it.  This was partly because I only recently got a Wok which works on my stove, and partly due to a friend of mine saying that even if you find the right ingredients in London, it will never taste the same as it does in Beijing.  Perhaps that is once reason why I have never tasted anything remotely like it in a Chinese Restaurant in the UK.
This Chicken and Peanut dish always seemed to be a popular choice in Beijing, especially in some of the Sichuanese restaurants we tended to visit.  The Sichuan Peppercorns tend to have a bizarre, mouth-numbing effect, that definitely seems a bit strange when you first try them, but which helps with the heat of the Sichuan Peppers.  This is definitely a taste sensation that everyone should try at least once in their lives.
Part of the inspiration for making this came from reading the recipe at Rasa Malaysia, one of my favourite food blogs.  The recipes and photography definitely make subscribing to the RSS feed well worthwhile for the occasional inspiration, however, the recipe here doesn’t include Sichuan Peppercorns, and so I had to look elsewhere for a recipe which included them.  It’s also worth checking out the Ma La Crayfish photo, and if you ever order it in Beijing, try and make sure you get latex gloves to eat it with if you want to be able to touch any sensitive areas of your (or anyone else’s) body in the next 24 hrs!  It takes a lot of hand-washing to get the Chilli off your hands.
For me, the most important ingredient in this recipe is the Sichuan Peppercorns, as without them, I don’t think it would quite re-awaken the memories of the dish I enjoyed in Beijing so many times.  They’re not the easiest thing to find, although a trip to my local Wing Yip found pretty much everything required.  The ones I bought were definitely not as potent as the ones in Beijing, so it is probably worth using the upper amount in this recipe.
This recipe literally takes minutes to cook, so personally, I like to have everything prepared beforehand so that I’m not looking for stuff while I’m cooking.  It’s also worth trying to getting quite thick spring onions, rather than the thinner, salad variety, as you then get nice chunks of spring onion, about the size of the chicken pieces, rather than weedy little bits.  The Chillies should also be of the Sichuanese variety.  They had sold out of these in Wing Yip, and the ones I got as an alternative were really too big and although tasted alright, for me, they were too mild for this dish. 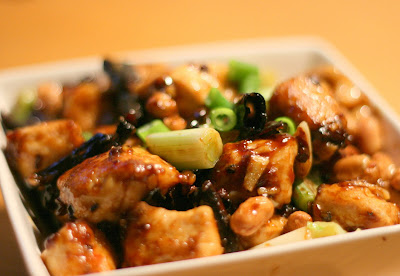 For the marinade
For the sauce
Mix the cubes of Chicken with the marinade, and keep in the fridge for about 30 minutes or so.  Heat up a couple of tablespoons of Groundnut Oil in a wok until it’s nearly smoking, then add the Whole Sichuan Peppercorns and Dried Chilli pieces and stir until the oil is fragrant.
Next, stir in the Chicken pieces, and when they’re all separated, stir in the sliced Garlic and Ginger.  Stir fry for a couple more minutes, then add the spring onion.  After about another minute, pour in the sauce and ensure that everything gets a good coating before finally adding in the peanuts.  Give it a quick stir so that the peanuts also get a coating in the sauce, and serve immediately.
Serve with Rice, e.g. Thai Fragrant Rice.
at 12:01