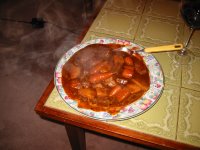 If I were making it again, I doubt there is much I would do differently. Except perhaps use a bit of bacon as well, as one recipe suggested. I would probably take the photo with the stew in a nicer plate or bowl, and slightly better presented. But other than that, it was pretty good as it was. It's what it tastes like that really matters, not whether someone has sloshed the gravy around on the way from serving to table.
Still working on the requirements of the site, and investigating various 3rd party APIs which may also be needed.
at 03:05