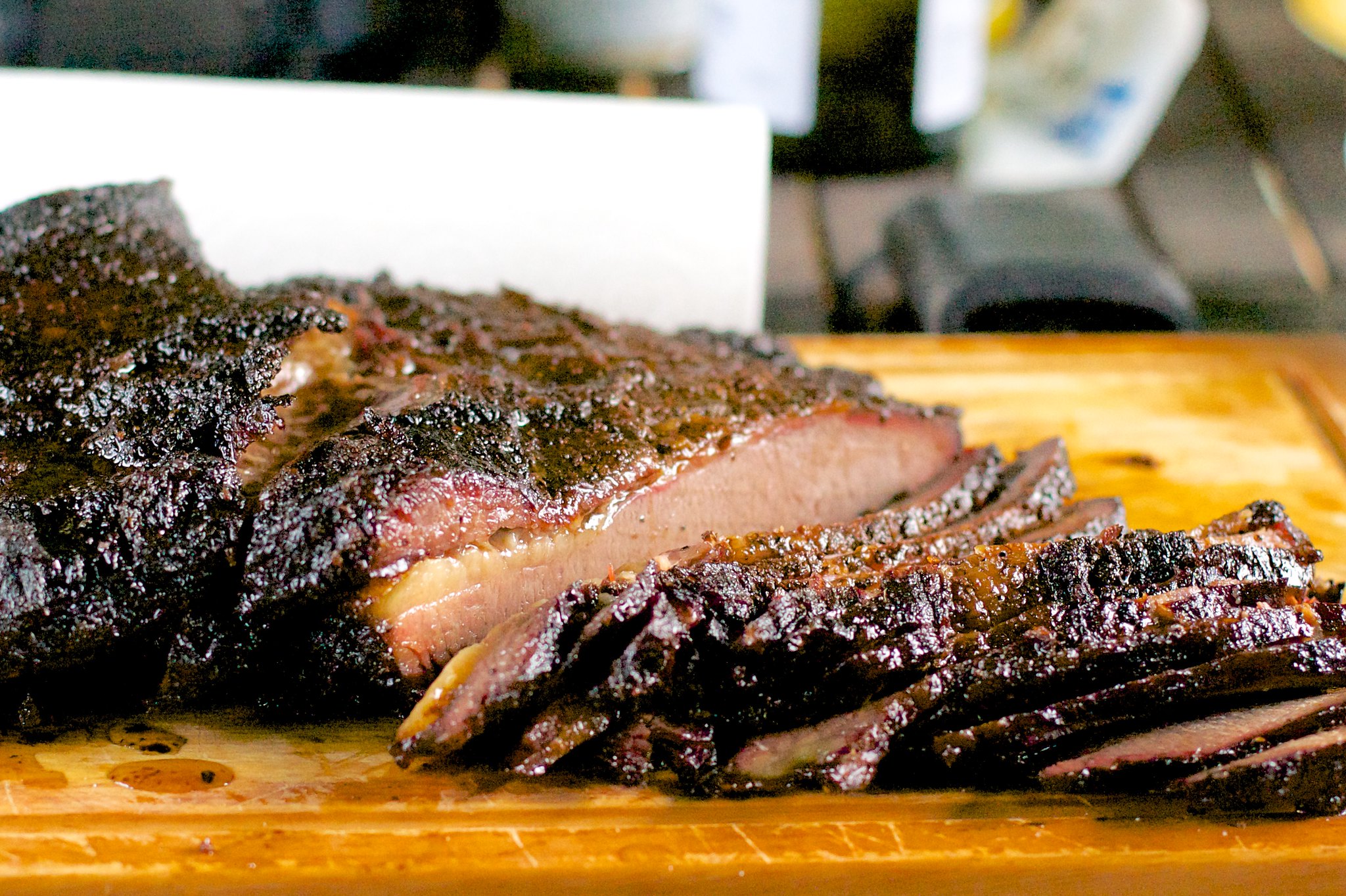 I've done a few briskets on the barbecue the last year or so, but being in the UK, the brisket cut we get isn't the same as the one we see of all these US based pit-masters smoking.  When I get a brisket from my local Irish butcher, it generally comes with bones (which are useful for stock), and is a totally different shape to those I see on US barbecue websites.  A quick scout for the wikipedia entry on brisket shows why.

However, there is at least one butcher in London that will sell a really nice quality Packer Cut Brisket, and for this particular barbecue, I went to Turner & George.  The 6.425kg hunk of beef that arrived early Friday morning was something to behold. 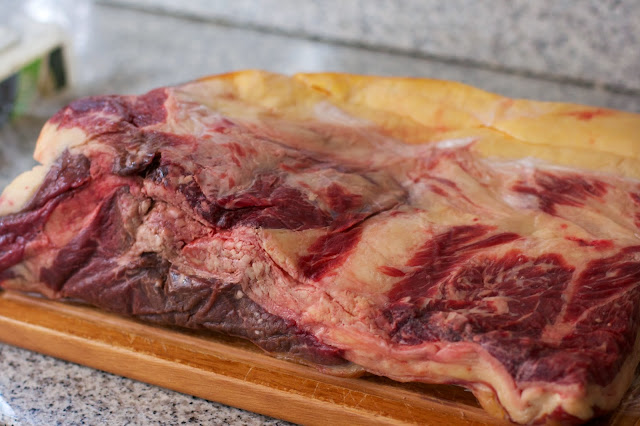 The photos just don't do it justice (plus I should've also taken a few shots of the other side).  A lovely, properly aged, piece of brisket, just needing trimming and rubbing, leaving for about 12 hours,  and then putting onto the Weber, for another 12 or so hours.  I thought about injecting Veal Stock into it, but once I realised that I'd run out of stock anyway, I decided to just to let the meat speak for itself.

Put into a spice blender and blend until powdered.


Trim your brisket to get rid of some of the excess fat.  There are many videos on Youtube showing how to do this.  Depending on where you get yours from, there may be more or less to trim off.  If it's not an aged piece of brisket, probably leave more fat on, to help maintain moisture.  Once trimmed, rub the meat in the Light Rapeseed Oil, and apply the rub liberally all over the meat.  Wrap the meat in cling film and leave in the fridge for a few hours at least.  Remove the meat from the fridge an hour or two before you intend to start smoking.

If you're using a Kettle Barbecue, try arranging your coals using the "Snake Method", with chunks of Mesquite lined side by side on top of the unlit coals to last for the first 5-6 hours of cooking (half a dozen fist sized pieces perhaps).  Put a drip tray filled will water under where the meat will be, and another above the hot coals.  I've used this a couple of times now with great results.  However, if using a remote thermometer, position the grill thermometer to get an accurate reading can be tricky.  I think I just need to mount it near the one on the lid of the barbecue.  Having the remote thermometer probe permanently in the meat does help in not prodding too many holes in it and losing precious moisture.

Get the barbecue/smoker going at 110°C (around 225°F) and put on the brisket, close the lid, and keep and eye on your temperatures.  You need to maintain the same temperature for about 12 hours.  Unless you see the barbecue is not smoking when you think it should be, or the temperature gauges have gone way high or low, then you shouldn't be tempted to open it at all.

As many websites will say, once the temperature of the thickest part of the meat reaches 70°C, the heating will 'stall', literally for hours as some of the moisture evaporates.  Depending on the age of your beef, etc., at this point, you might want to wrap the brisket in two layers of foil and return to the grill/smoker.  With a properly aged piece of beef, or a well regulated smoker, than might not be necessarily, but if you're short of time, and don't mind not having a great bark, then wrap away.  Also, if you have issues towards then end of your smoke and the meat loses temperature, wrapping with foil can help out to get it up to the 84-88°C you want before you take it off the heat.

Once the meat gets to between 84-88°C, if it's not already wrapped in foil, wrap it in at least 2 layers of reasonably heavy foil, then wrap a couple of towels around that, and leave it for at least an hour (I normally leave it two).  Then unwrap it, lift it out of the foil onto a chopping board, and pour the juices out of the foil, either into your pre-prepared barbecue sauce, into a separate jug, or just straight back over the meat.  Depending on the result, sauce may not be necessary.

The two pieces of meat in the packet cut should separate easily at this point, so pull them apart so that you can carve them separately.  If it's not immediately obvious which way the grain is in the meat, cut off a corner to see, then carve the whole thing into slice that will stay mostly together, but will almost melt in the mouth when eaten.

I understand why people have electric smokers now, but still, it's nice to get at one with your coals and grill. 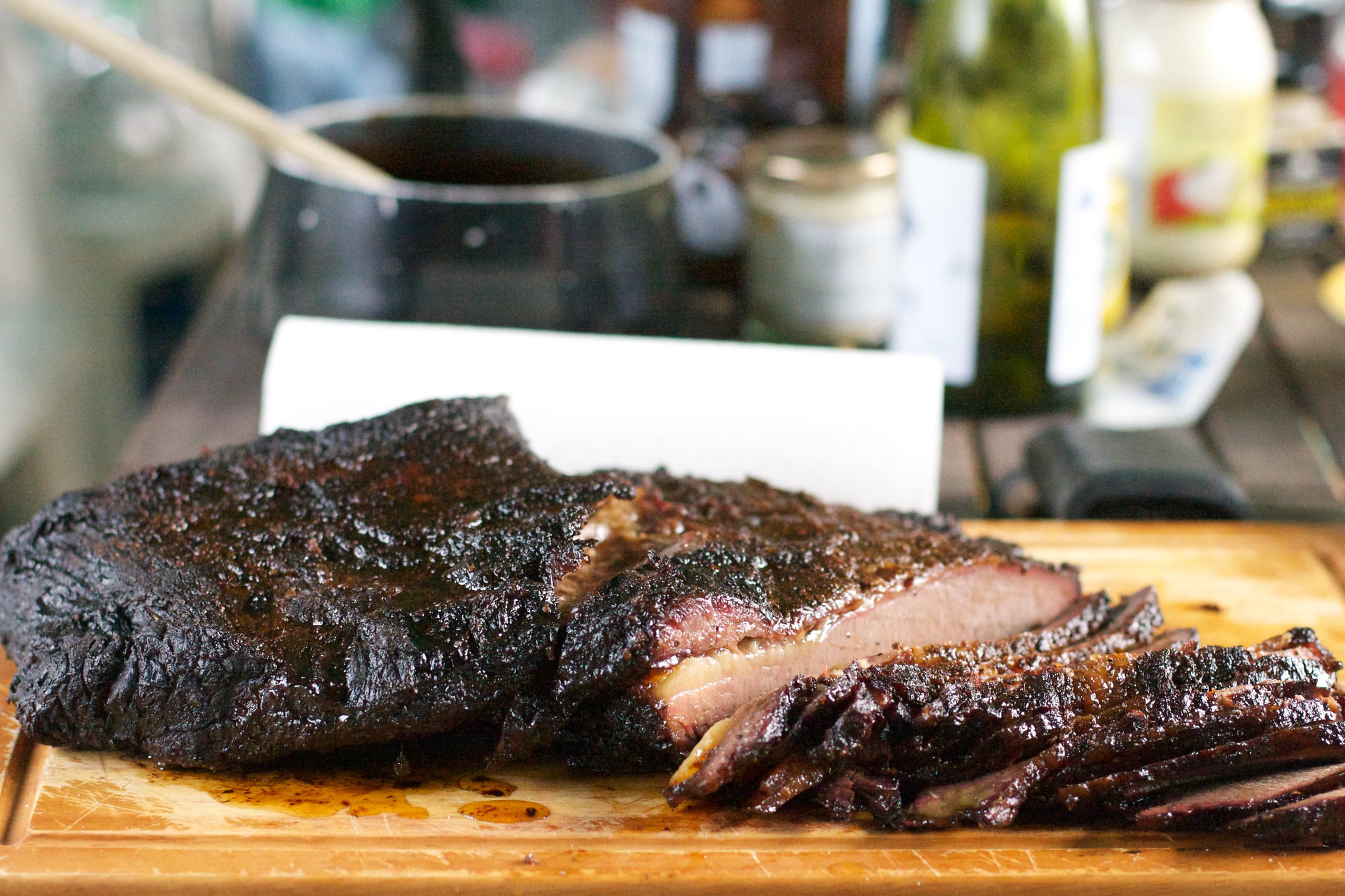 And within about 10 minutes... 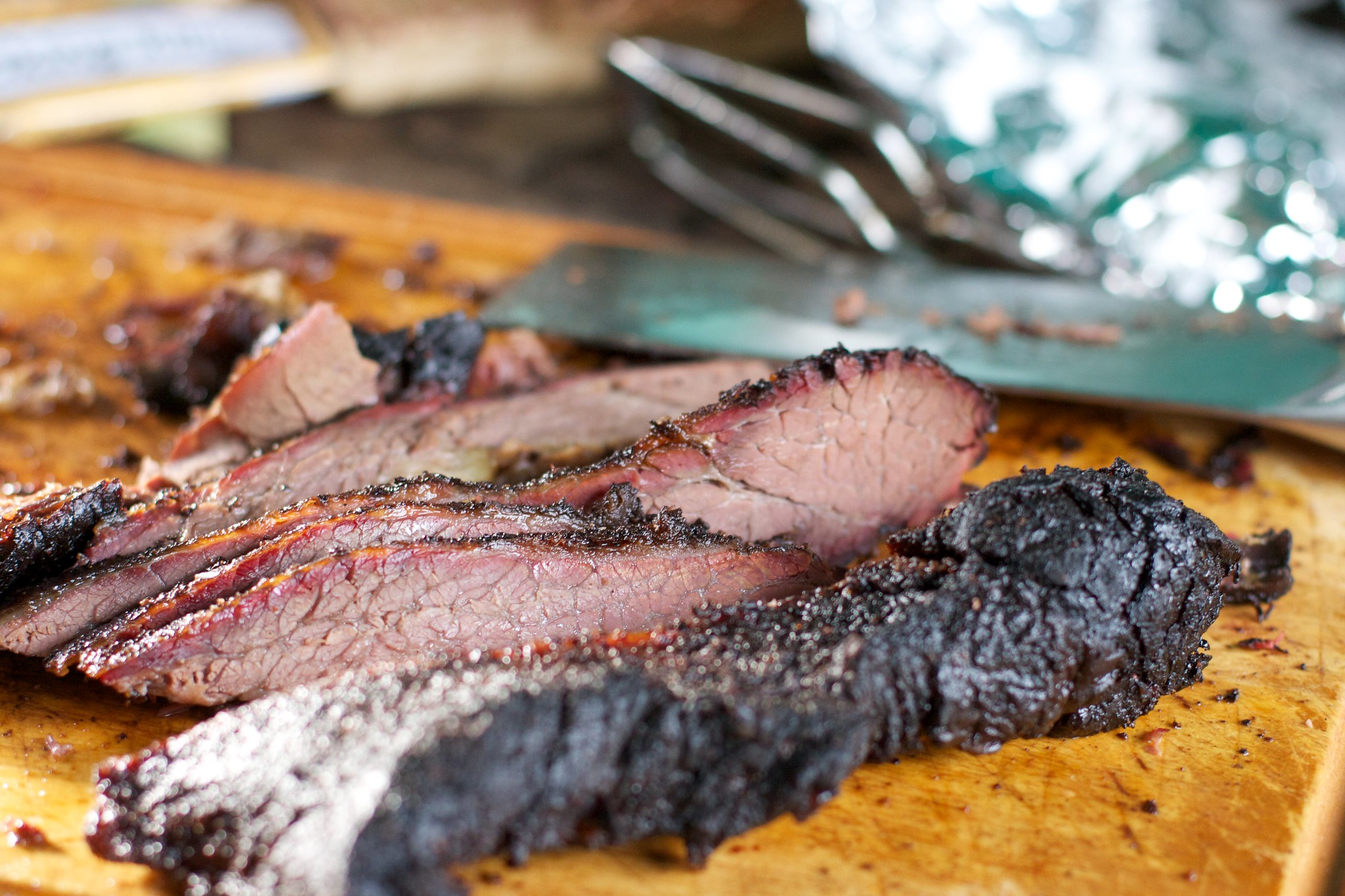